I Love You… Physically

In my previous post, I gave you a little insight into my history with a prominent guy in my life, All Star.  As promised, here is the story of the greatest drunk dial of all time…. or maybe even a pickup line for you boys to use at the bars.

I had lived in The City for a year or so and had finally developed a friend group… not just people you hang out with, but an actual ‘crew’ if you will.  I went to meet up with a few of them for some mid-week beers at a local bar we frequented and I was expecting there to be four or five of us… somehow everyone in the crew and then some showed up and there ended up being about twenty of us.  Awesome night.  Also the night I met All Star.

Not long after I got to the bar, a guy I had only met a couple times but was part of the extended friend group came up to me and said ‘Hey Sarah – have you met All Star?’  I hadn’t, so I reached out my hand to introduce myself…

AS: I’m All… what’s your last name? (He must have sensed that I wasn’t a Middle Name girl on Facebook)

Me (immediately): OOOOMMMMGGGGG!!!! You’re the only one that understands what I go through EVERY TIME I go through the checkout line, or show my id, or buy a pair of pants!! (it may seem like overkill.. but yes, I was excited to have someone that finally understood my daily woes)

Conversation continued and he was hiiiiiiiiiiiiiiilarious.  Instant best friend for sure.  It wasn’t until a month or so later I learned his last name was in fact Star (aka: richest/whitest/also the name of a prominent world-wide bank last name).  I was pissed!!  The entire basis of our one month friendship was a liiiiiiiiiiiie… ok just kidding – I was totally impressed he kept it going for so long.

Fast forward, The Ex and I were dating exclusively and I continued to hangout with my new crew.  Turns out All Star was the core of my crew and would always extend an invite to me for things going on within the ‘inner circle’, if you will… essentially that meant texting banter here and there, but no real friendship.  The Ex would join me and the crew on occasion, but he had his own crew so as with most new relationships, there is a lag of balancing friends/relationship/career etc until you get into a groove.  nbd.

One night it was around 10p and I had just gotten in bed.  True to most old ladies I was reading a book when my phone started buzzing.. I looked and it was All Star.  Honestly the first thought that went through my head was “Eh.. this is a little inappropriate for him to be calling at 10p… I need to set some boundaries” so I didn’t pick up.

He called a second time.  This time I was genuinely worried, so I picked up and our conversation went like this:

Me: Hey All Star, you doing alright?

Me:  Omg, you’re kidding.  I’m literally in my pajamas, in bed.  There’s no way I’m coming out… and it’s a little late to be calling for a Tuesday….

Me: hahaha no… going to lay low, but thanks

Me (I love drunk dials… so I went with it): All Star.  Are you trying to tell me you think I’m hot?

Me: Not going to lie, I’m a little offended…. what about my awesome personality???

AS: yeahyeahyeahyeah, imeanyeah…. that too.  but really i just love you.  physically….

Coincidentally that was the last night he drank and he has been completely sober for two + years!  I like to take full credit for his sobriety 😉  In all seriousness, I am so proud of him and everything he’s accomplished… and will never forget the first time he told me he loved me…. physically. 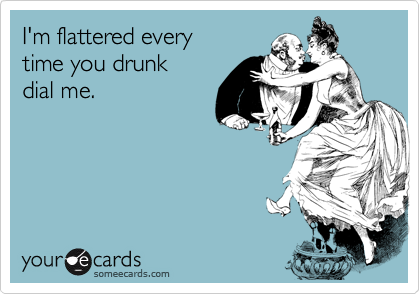 3 thoughts on “I Love You… Physically”