Tips For Guys Who Want To Avoid ‘THE FRIEND ZONE’

The photo above is courtesy of http://football101women.com/  (this website could not be more adorable)

The Friend Zone (TFZ) has been a topic of discussion between Ryan and I for a while…  so while I’m waiting for him and [Mario] to show up at the airport, I’m going to post my thoughts.  We had a reader write in asking if they were being friend zoned, we haven’t responded yet because well…. we are just about as clueless as everyone else!  (Sorry reader – you have not been forgotten!!) Our [virtual blog] friends over at LoveJays recently blogged about TFZ and that was just the kick in the pants we needed to finally post on the topic… in Ryan’s words: The Lovejays beat us to it!!

Now… I am the QUEEN of TFZ… the friend zone is my end zone, if you will.  I can intentionally friend zone a guy within three seconds by way of side hug, talking to them about a crush (or any guy for that matter), not letting them pay for a drink, and only in the most extreme cases… using the phrase “you remind me so much of my brother!”

It wasn’t until I started hanging out with Work Bro that I realized that guys are fully capable of dodging my friend zone tactics… WHAT?!  I still don’t know exactly how he did it, but for all the guys out there that want to get out of TFZ… let me share with you some of the things he’s done to keep himself out of my friend zone and into his end zone.  It’s impressive really.

Saving his number.  When he saw that he was in my phone as [first name, trigger word] he immediately said “Hey, let me go ahead and change that for you” and typed his real name into my phone.  Subtle, but also stamped his man hood… definitely a first.  I used this tactic when Toga Teddy had me saved in his phone as ‘Sarah PB Halloween’ … youch (and in case you’re wondering, yes I went on a date with him last night).

Activities.  We have yet to be bored or do anything that’s less than awesome when we hangout.  I’m convinced actually getting out and doing things is a great way to stay out of TFZ… when you’re out and about, you look like a couple.  When you’re just at home drinking beer and watching the game… well… that’s exactly what you’re doing.  By giving the appearance of being a couple to the outside world (whether it be day or night), I think it’s subliminally kept me from being able to fully friend zone him.  Mad props, Work Bro!

For you visual learners out there… compare this:

Guiding the conversation.  I talk a lot (like a lot a lot….why do you think I blog?!)  Work Bro is great because he talks just as much (if not MORE) than I do!  He always has interesting things to say, is always interested in what I have to say, always comes up with great ideas/hypothetical situations and most importantly… he takes the lead and guides the conversation in a direction that doesn’t allow me to talk about topics that would put him in TFZ.  I am so impressed by this because I am a professional schmoozer (aka ‘consultant’ in real world terms) and a woman at that!  I seriously have no problem steering conversations exactly where I want them to go. Somehow Work Bro has managed to keep control of our conversations without being a total douche.  I have no idea where he learned this, but it’s going to get him far in life.

What a little schmoozer! (takes one to know one)

Making plans.  Every girl wants a guy that will plan ahead… it shows that you’re on their mind and what girl doesn’t love that attention!?  Work Bro has been awesome about making plans without it feeling like a date because they’re not your standard ‘datey’ things.  We went to a street fest together not too long ago (concert + craft beer + food trucks = BEST NIGHT EVER!) and there were drink tickets… you buy the tickets and you give a ticket to get a drink.  For some reason every time I went to get a beer from one of the brew trucks (I think I just created that phrase… AWESOME), they wouldn’t take my drink ticket (first world problems, I know).  That resulted in a lot of free beers and a drunken Sarah.  He, on the other hand, did not have the same luck and had to hand over a ticket for every beer.  I have a heart for those who are less fortunate so I gave him my beer tickets 😉  About a week later he texted me a picture of one of the beer tickets and said “I still owe you a drink”   How could I say no to that?!  Again. Friendly, but definitely not in TFZ.

Who’s place?  Coming to my place rather than always going to his place has kept him out of the friend zone.  Every guy on the planet tries to get you back to their place… but what guys need to realize is that the saaaaaame things you want to happen at your place could happen at her place, quit being so lazy!!  The night of the street fest he came to my place, parked, and we walked downtown together.  Beer beer, music, food, more beer and a rooftop bar later… we cabbed ourselves back to my place and he was in no condition to drive home.  I didn’t have the heart to force him sleep on my sofa, so I said “sofa is all yours but I don’t mind letting you crash in my bed either – totally your call.” You can guess what he chose.  Absolutely nothing happened and nothing was going to happen… but I did warn him about my cuddling tendencies.  [As soon as I fall asleep my arms (and sometimes legs) will reach for the closest thing to me and I latch on (also explains why I sleep with 62 pillows)].  It may sound like I’m trying to be all cute and flirty, but this is no joke, I get aggressive… (ask Mego about the boob night) So when I gave him my warning: “Just a heads up.. as soon as I fall asleep I will cuddle you.  My apologies in advance.”  He sighed heavily (as if offended) and said “Well let’s just get this over with” and wrapped me up in his arms… too cute.  I got to be little spoon ALL NIGHT!  YESSSSSSSSSS! 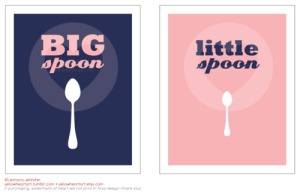 I’m still trying to piece together how exactly he’s managed to finagle his way out of TFZ, but wanted to share what I’ve gathered in case anyone could benefit from the tips 🙂  I leave you with an extremely friendly picture from our night at the street fest.. in Ryan’s words: “You’re talking selvies with this guy!?  Most definitely NOT in The Friend Zone.”  HOW DID HE DO THIS!?

this was after a few beers… give us a break!