By Can I Get ur Number?? February 22, 2013 city life dating drinking girls humor Single Life Tinder

So the widespread acknowledgement of the marvel that is Tinder has had its pros and cons. While I was able to be an expert on all things Tinder for a while, it has led to many more of my friends getting the app. It seems as though that has happened across the board, as I recently read a report that there are twice as many guys as girls on the app. Brutal! At the same time I have been getting fewer and fewer matches (I’m going to say its because of the worsening guy/girl ratio) ruining the confidence booster that Tinder was for me. I still have some Tinder matches in the bank so don’t worry too much about me. 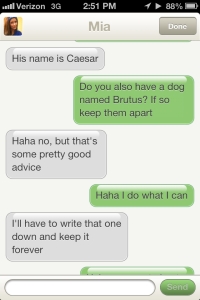 Random other conversation I got into…I’m a real hoot

To follow up my previous post on Tinder I have to unfortunately say that things crashed and burned with the girl that I mistakenly booty-Tindered (inventing that term right now). Haven’t heard from her since then and am washing my hands of that whole fiasco. However, things started to go well with one of my other Tinder matches, Becca. I had been talking to her a decent amount and was hoping to meet up with her soon.

So last weekend I finally did the unthinkable, I ran into Becca! Due to some inclement weather most of my friends decided to spend the weekend locally and it ended up being a complete blast. Rather than go to the store to get non-perishables and responsible things I bought frozen pizzas and my friends bought a keg. Game, set, match.  We basically spent the entire weekend getting annihilated and playing massive quantities of FIFA. Really nothing better in the world. I spent Friday night at a bar trying to convince a .4 (Binary Scale) from my past that she didn’t actually have a boyfriend (shocker that didn’t work) and drinking obscene amounts of hipster beer. Fast forward to Saturday and we had been drinking for a couple days. I’m pretty sure that I had simply rolled my Friday drunk into my Saturday drinking creating some sort of “superdrunk” that was not really sure what was going on in my immediate surroundings.

We all made it out to the bar Saturday night and were basically already at the peak drunk stage. This is the point where you are “good drunk” (social, funny, etc.) and comes right before you hit “bad drunk” (“who invited this guy who has no idea who anyone here is or where he is?”). At this point I was walking back from the bathroom when I saw my friends were talking to a group of cute girls. Time for me to wring out the last stages of “good drunk” before I inevitably fall off the cliff towards “bad drunk.”

Me at about 12:15 AM most Friday/Saturday nights

I was really in no way prepared for what was about to happen as I walk towards my group of friends and hear “Oh yeah, I know Ryan.” Wait what? Of course being as suave as Drunk Ryan is I responded, “wait, who are you?” Smooth. It turned out to be Becca out on the town with all of her friends. I was pretty stoked because there’s only so much you can tell from a tiny image in Tinder and all of this Catfish talk lately had been getting me worried. I talked to Becca for a couple minutes but then thankfully (for both of our sakes) she walked away to catch up with friends. Thank god because I ended up completely obliterated and hitting on this girl who I randomly ALWAYS run into and adding her on Snapchat.

Sidenote: Nothing, I repeat nothing good can come from drunkenly adding a girl to Snapchat.

After a few drunk texts to Becca asking where she was I shot her a text asking to go out later that week and she accepted. I’m still amazed that I was able to scrape anything positive out of that night but am excited to see where this leads…