The Ride of Shame

By Can I Get ur Number?? November 5, 2012 costumes doctor fail girls halloween humor walk of shame 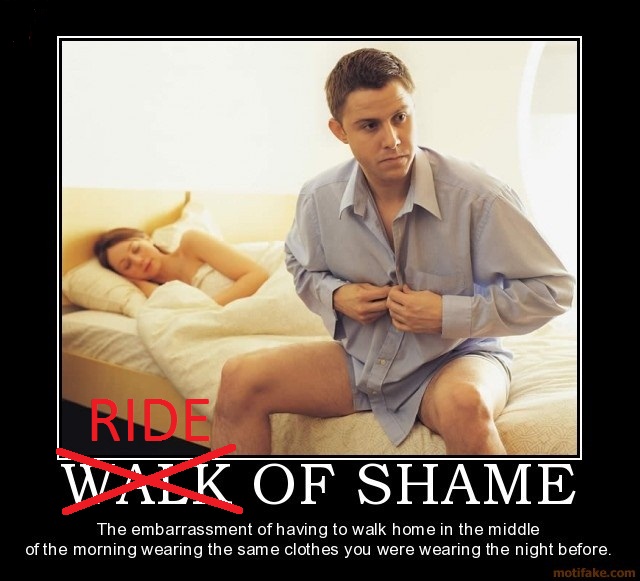 So Sarah blogged about her proud walk of shame from a couple weeks ago so when I was faced with a similar predicament I decided to try a different approach: the Ride of Shame.

Saturday was the second night of the aptly named Halloweekend 2012, and if you refer to my previous post you know how much I enjoy Halloween.  The more I think about this weekend the more I wish that it would happen at least five times a year. The outfits that girls wear are pretty incredible and being able to go out in a hilarious costume is always a blast. For night two of Halloweekend I was going to go out as a doctor of love. I had acquired scrubs with hearts on them (pictured) and was going to bring out a fake stethoscope and just lie about actually being a doctor (my goal was to convince at least five girls of this). 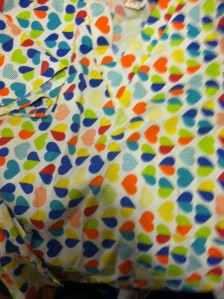 The night started out with going over to Ted’s apartment in the city to get ready for our journey to go to a party in the rich part of the city. When I arrived Ted and his girlfriend were hanging out with another couple dressed as Paul Ryan and Ke$ha, and I wasn’t sure of the situation but she was a 0 regardless so I didn’t really care.  Of course the girls were taking a million years to get ready so after 30 minutes we finally began our journey. In typical Ted fashion, he made us walk over a giant hilly part of the city rather than look up the actual directions to the apartment we were going to that happened to be across the street from a subway station. Thanks Ted.

We show up the party and, much to my dismay, Ted finally tells me it’s a law student party. I’ve never seen more 0s in one room in my life. There was a 1 there with her boyfriend, a .4 (if we’re being VERY generous) and a litter of 0s ranging from “what’s with her face?” to “I think she ate a person.” Super. Luckily Ted had a friend from home (1) that was pretty good looking, we can call her Oscar (as in the grouch, she is not a Mexican man).

So flash forward an hour and the half and Ted, Paul Ryan, and I have taken about 8 Jell-O shots each and were feeling very toasty. We decided it was time to go to the bar.

Sidenote: When you get to the point of the night where Jell-O shots don’t taste awful, you know you are messed up.

At this point Ke$ha has been trolling around Paul Ryan and I for a while so she is starting to get really annoying. Congressman Ryan and I were not falling for her tricks and continued to ignore her as we walked to the bar. She was wearing 5 inch heals and just falling over the whole way. I’ll never understand why girls do these things.

Other Sidenote: The walk to the bar on Halloween is always the best. Shouting at random people, using ridiculous pickup lines on random girls, etc. it’s great.

So we get to the bar and I notice that Cynthia (sailor costume, friend of a friend, 1) was there as was Tiffany (Audrey Hepburn, friend of Ted’s girlfriend, 1). I am excited. The breakdown of targets is basically:

Of course that sounds easy enough, but five friends from my fantasy football league that I haven’t seen in a while were there so we wasted an hour talking and doing shots (Self Sabatoging Ryan style). Fast forward and after quick evaluation of the situation I see that the Sailor is dancing with a buddy of mine, Oscar is hanging with her law friends chatting, and Audrey is MIA. Perfect.

I decide to go to the bar to reevaluate my night and Ted comes out of nowhere:

Ted: Dude, (Oscar the Grouch) has been looking for you. She told me to tell you that you are up to the plate to talk to her.

Confused Dr. Ryan: (I have no idea what that means so I just stood there for a second) Uh, okay.

Long story short, I went over and talked to Oscar for about ten minutes until her friends decided that they were too drunk and had to leave the bar. She lives in the city, I’ll see her later.

So #1, and #2 are out of the way, I guess #3 is up if I can find her. Audrey is an accountant from my school so this is naturally another example of me getting sucked into the Vortex (link). I go over and talk with her for a little but then end up leaving the bar with her and a couple other friends.  I realize now that I must have been hammered because I ended up with the most random grouping of individuals possible and head back to where our apartments are (conveniently pretty close).

I exit the cab when she does and say that I’m going to walk back from there since our apartments are close but then talk my way into her apartment. She was doing Nic Cage quality acting job of playing hard to get so I figured that it wouldn’t be a very difficult task for me. Long story short we go upstairs and hook up for a little bit after I put on my music. I wake up the next morning still drunk and go in for round two.

I come to find out that this girl has awful taste in music (Dave and Dave only), considers watching a television program the highlight of her week, and says that the new hobby that she’s going to get into is Pinterest. Pinterest is not a hobby!!! At this point I’m extremely bored with her the conversation goes somewhat like:

Ryan: So, how do you get to your clients anyway?

Audrey: Oh I actually have a car.

Ryan: Interesting…any chance you could give me a ride home this morning? (Didn’t feel like walking through a busy area wearing scrubs and a guilty smile. Didn’t really feel like walking regardless so this seemed like a good idea)

I live maybe a mile from her house walking so I DEFINITELY could have made it back by myself (which she quickly realized as she dropped me off). However, I had to see what it was like to get a ride of shame and let me tell you, it is incredible and comes highly recommended from Dr. Ryan. Halloween is great.

3 thoughts on “The Ride of Shame”